Toi Māori Aotearoa has organised and been involved in a number events around New Zealand and internationally that have promoted Māori arts – both in developing it and presenting it to audiences both in New Zealand and abroad. We strive to nurture and present the best of Māori art and culture to audiences everywhere.
Atamira - The Lifeforce of Māori Contemporary Dance
Auckland, NZ, 2003

Waka Taua at the Commemoration of the Battle of Passchendaele – Te Hono ki Aotearoa
Passchendaele, Begium 2017 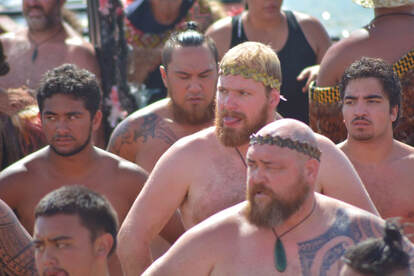 Dutch kaihoe Peerke Van der List at Te Tii Beach Waitangi 2018
​The ceremonial waka taua Te Hono ki Aotearoa (The Link to New Zealand) was carved in 2010 and is based in the Netherlands at Volkenkunde Museum in Leiden. This is a 100 year partnership between the Museum and Toi Māori. Click this link for the Te Hono ki Aotearoa Documentary.

This waka is used a vehicle for promoting contemporary Māori arts on the world stage in Europe. Since handing over the waka to the Dutch in an elaborate ceremony on the picturesque Dutch canals during October 2010 in Leiden, it has been used in the following events;
​Toi Māori have also used other ceremonial waka taua as an iconic  feature to promote Māori arts globally;
Since 2010 Dutch rowers who have been trained as kaihoe for Te Hono ki Aoteaora have been hosted at the annual national waka pageant at Waitangi.
Commemoration of the Battle of Passchendaele
Passchendaele, Begium 2017
As part of the commemorations marking the centenary of New Zealand's involvement in the Battle of Passchendaele, Toi Māori in partnership with the New Zealand Ministry of Foreign Affairs and Trade (MFAT) will feature the waka Te Hono ki Aotearoa, based in Leiden, Netherlands to take part in a commemoration ceremony alongside the Māori Cultural Group of New Zealand Defense Force and New Zealand Youth Ambassadors at the Menin Gate in leper on Wednesday 11 October at 7pm.

8 kaihoe (paddlers) with a wide range of skills and experience have been selected from New Zealand whilst 6 Dutch from the Waka group of Njord Royal Rowing Club in Leiden, Netherlands will complete the 14 strong group of kaihoe.
MAI Programme
In partnership with Creative New Zealand, Toi Māori Aotearoa delivers the Māori Art Internship Programme (MAI). Since 2014 Toi Māori Aotearoa has cared for the professional development of 18 rangatahi trained in various art and culture organisations.