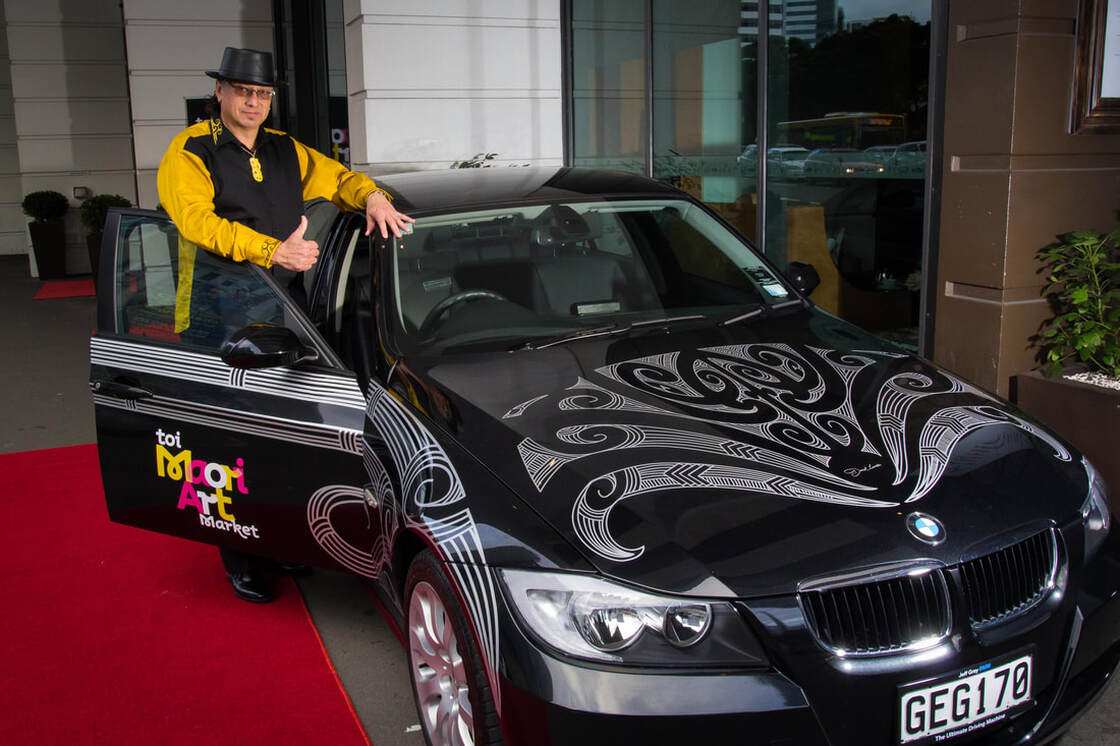 Derek Lardelli with the customised BMW featuring his design produced for the 2014 Māori Market, TSB Arena, Wellington
Derek is one of New Zealand’s finest tohunga renown for his leadership and 40 years of dedicated mahi to the maintainance and advancement of he taonga tuku iho.

A key figure in the resurgence of tā moko, Derek makes equally astounding contributions to whai kōrero, karakia, kapa haka, the visual arts and graphic design, the Māori art education sector and widely respected for his commitment and dedication to his iwi nui tonu.

Derek holds a number of leadership positions within various organisations dedicated to the maintenance and retention of mātauranga Māori. Currently, Derek is Professor and Principal Lecturer at Toihoukura School of Māori Arts and Design in Gisborne, serves as Te Pūkonohi on the Board of Toi Māori Aotearoa and Chair of Te Uhi a Mātaora, the tā moko committee of Toi Māori Aotearoa and a valued advisor to multiple cultural and government agencies.

His expertise as tohunga has lead to groundbreaking projects of international significance for the nation including corporate rebranding for Air New Zealand, the composition of Kapa o Pango, the haka of the All Blacks, and remains part of their training programme.

Closer to home, Derek has been Kaitataki of Te Kapa Haka o Whāngārā mai Tawhiti leading them to winning Te Matatini in 2017.

For these services Derek was awarded an honorary doctorate from Waikato University in 2018 and bestowed with a knighthood as part of the Queen’s Birthday conferments in June 2020.

Derek has been involved with Toi Māori Aotearoa since the inception of the organisation in 1996 and the nature of his contribution to toi Māori exemplifies the work of a tohunga in contemporary Māori society.

In his role as Te Pūkonohi on the Board of Toi Māori Aotearoa, Derek operates as a strong advocate and dedicated champion of best practice in toi Māori. Across our varied activities, Derek applies his sharp intellect and expertise in tikanga, karakia and whaikorero to ensure that our work meets the standards of excellence expected by our ancestors, and officiates at many of our gatherings. Most importantly, we respect Derek for accepting the immense responsibilities as a conveyer of he taonga tuku iho for the advancement of our people.

The future of toi Māori is represented by the many individuals he has influenced, encouraged and nurtured.