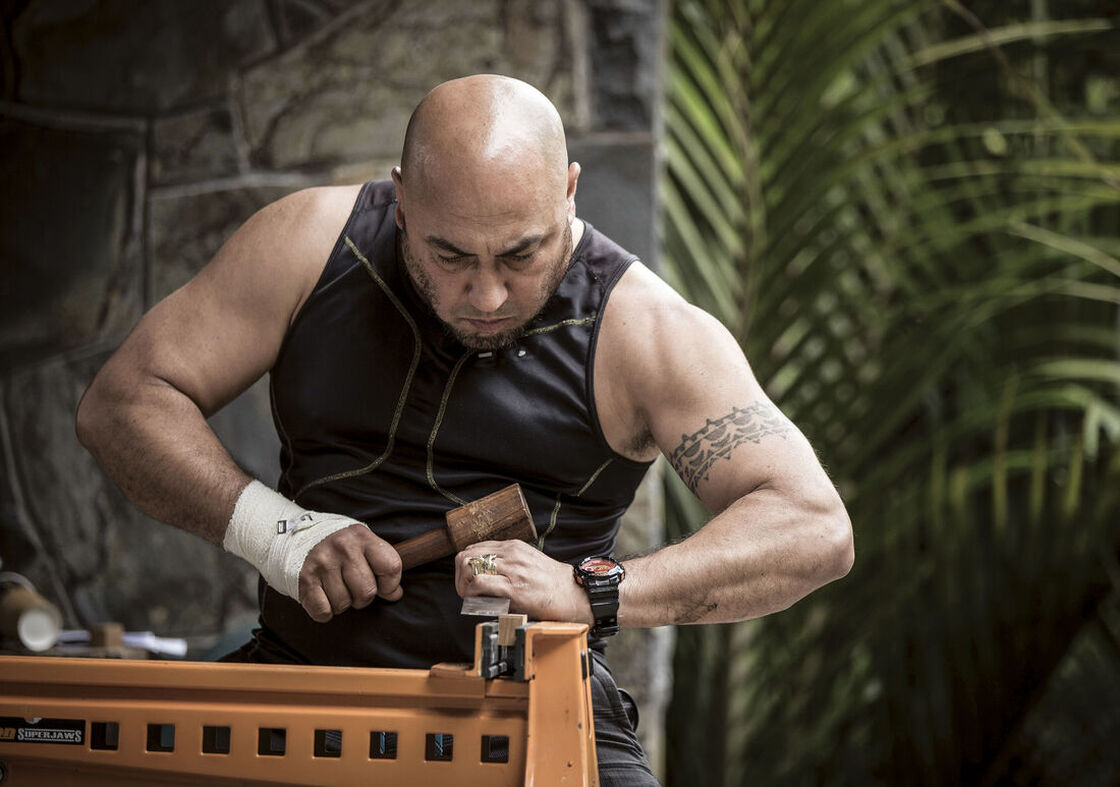 Rangi Kipa is a renowned Māori sculptural artist whose creative practice is at the forefront of defining the aspirations of Māori today.

Rangi grew up on the outskirts of Waitara, Taranaki at Ngapuketurua pā beside the Waiongona River, a site of great relevance to the origins of the Ātiawa people of Taranaki and skirted by major battle sites of the New Zealand War.

Rangi trained as a tauira whakairo at the Maraeroa carving school in Porirua in 1983-84 working in the style of his ancestors and has since lead a reawakening of the renowned Ātiawa serpentine carving style, which hadn’t been practiced in Taranaki since the early nineteenth century.

At that time, Rangi remembers that the wearing of taonga by Māori was regarded as a major political statement. He also came to realise that the visual language of Māori art was as under the same threat as te reo Māori. These experiences influenced his dedication to stimulating knowledge about the language and function of whakairo and encouraging the normalisation of taonga—including moko—in the contemporary lives of Māori today.
​"Our art forms are languages and play a fundamental role in the transmission of our knowledge systems and our identity. As dream weavers and sages, our job is to be activists and protagonists and propose alternatives to our present realities because most of our present reality is sculpted by the West and in many ways we are responsible for purging ourselves of what we don’t need, what doesn’t serve us anymore."
Rangi Kipa, Te Ātinga 9th International Indigenous Artists Gathering 'Puhoro ō Mua, Puhoro ki Tua', Tūrangawaewae marae 2019.
​As a student in Māori studies and anthropology at Waikato University (1991 - 1993) Rangi was introduced to taonga puoro by Hirini Melbourne. Increasingly he began to study taonga held in museum collections with specific attention given to taonga puoro, whakakai (adornment) and rare forms from the early periods of Māori art. After a trip to Rarotonga in 1992, Rangi was inspired to take up tā moko and by focussing his development on small scale formats, Rangi achieved fluency in ancestral design languages and technical mastery in a range of art forms and materials.
While a design tutor at Wellington Polytechnic Rangi made his national debut as a contemporary Māori artist in the 1996 exhibition, ‘Patua: Māori Art in Action’ at City Gallery Wellington, which was part of the Toka-a-Toi International Festival of the Arts and when Toi Māori Aotearoa was officially launched as an independent national Māori arts organisation. Rangi’s rei puta, intricately carved whale teeth pendants with delicate chevron-based ridged designs readily traced back to Eastern Polynesia, immediately commanded the attention of Māori art leaders and general visitors alike and he also practised tā moko in the gallery for the duration of the three-week exhibition. His rising profile as a Te Ātiawa carver was cemented through his completion of a waharoa for the marae ātea of Te Hono ki Hawaiki at the Museum of New Zealand Te Papa Tongarewa in 1998.
​Returning to Taranaki in 2000, Rangi became a founding member of Te Uhi ā Mataora, the Toi Māori Committee committed to the retention and advancement of tā moko. The wealth of moko kauwae witnessed on marae in Taranaki today is evidence of Rangi’s dedicated work along with the moko carried by many toa who undertake brave work around the world.
Also seen on marae throughout the country are Rangi’s vividly coloured ‘plastic tiki’. Meticulously hard-carved from the solid plastic compound, Corian, these works sought to reclaim and revalue the hei tiki from mass-market commodification in the tourism industry. Developed while undertaking a Master of Māori Visual Arts degree at Massey University (2001-2005), Rangi approached this new development with caution only to find immediate and enthusiastic support from Māori, Pākehā and international clients leading to such great demand that Rangi developed a line of moulded resin tiki and matau, which remain incredibly popular today.

Rangi continues to make unique pieces for individuals, and mark significant life events, with these taonga playing crucial roles in the lives of Māori today and in the future.
​Through the Master of Māori Visual Arts programme, Rangi moved toward large-scale work. As the 2006 Creative New Zealand Craft/Object Fellow, Rangi worked in Thailand to produce the autobiographical whare whakairo ‘Radiare’ (2007), which was included in the ‘Star Power’ exhibition at the Denver Museum of Contemporary Art and continues to reside in North America. This shift to large-scale has been further developed through major commissions for Waikato University (2011), Victoria University of Wellington (2012), Auckland Museum and the Ministry of Business, Innovation and Employment (2015) and most recently, New Plymouth airport (2019-2020), which received the Toitanga gold medal at the Designers Institute of New Zealand Best Design Awards (2020). 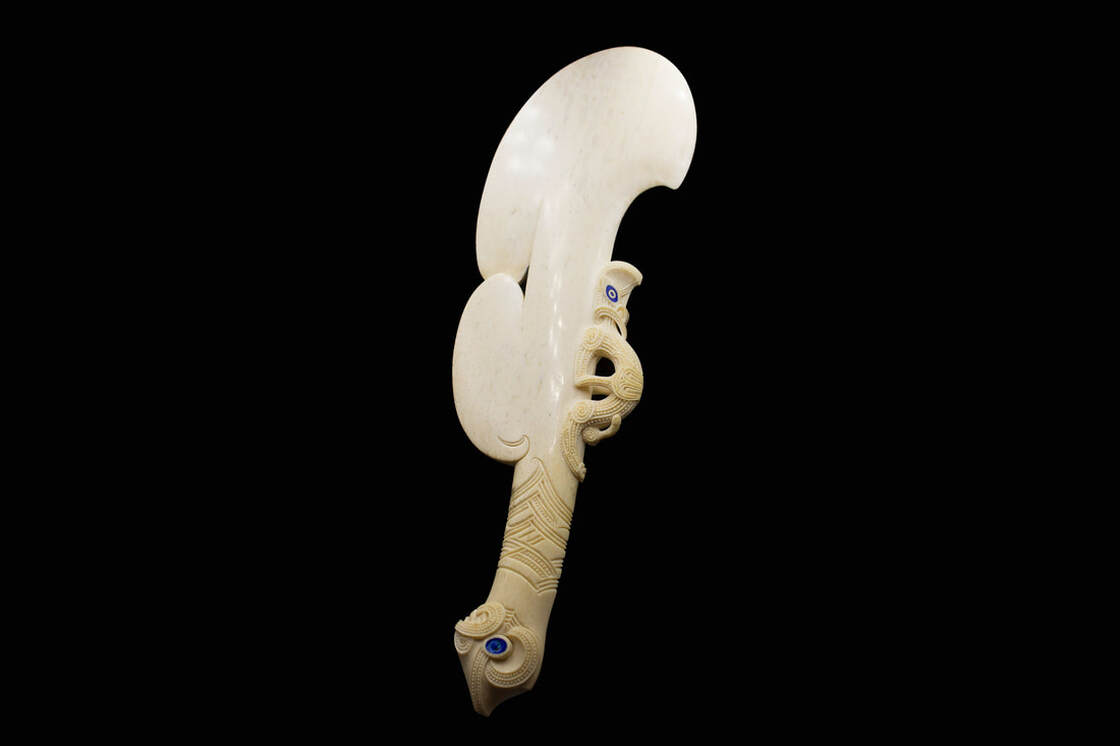 Te Rewanga by Rangi Kipa 2014
​At the 2014 Toi Māori Art Market at the TSB Events Centre, Rangi presented a solo exhibition of whakakai (adornments) and short hand-held weaponry including patu, wahaika and pātītī, with this presentation clearly demonstrating the breath-taking quality and breath of his practice as a tohunga whakairo.
​
​Since 2017 Rangi has been Chair of Runanga Whakairo, the network of Māori carvers convened by Toi Māori Aotearoa in 2005. In this role Rangi has advocated for the concept of whakairo as advanced design thinking evidenced in multiple art forms. More recently, Rangi initiated the Whakakai Mentoring Programme intended to encourage the profile of wahine Māori working in whakairo.
​"I like to continuously push my own boundaries and challenge the status quo, artistic expression, artistic practice should reflect the realities of life. This means that I use all manner of materials as mediums for my artistic expression from natural organic resources to composite space age compounds. I think a lot about the need for Māori people to navigate new pathways, to move forward much in the same way that the Māori people originally navigated their way across the Pacific."